This MA programme is the hardest thing I've ever done.
I've been wondering what I'm doing and why I'm doing it.
I don't have the answer.
It started as a reaction to me nearly dying due to a heart problem.
I wanted to do something purely creative.
Not influenced by commercial constraint.
I spent the first term trying to work out what I was interested in.
My Research Portfolio was a look at half a dozen different ideas.
Not an in depth analysis of one idea.
Truth and authenticity were central.
I decided to focus on a friend of mine.
She's a Trans woman called Simone.
I thought I'd make a film about her for my degree show and that would be that.
I'd sit on the edge looking in.
Observing and recording what she was going through.
I'd be detached and distant and tell her story.
That was the original idea.
I started to spend a lot of time with Simone.
I explained what I wanted to do.
To film her in her workshop and at home.
Just being her.
That I was going to make a film about her.
Not a documentary.
Something else.
The more time I spent talking with Simone the more I realised that I was getting involved.
It wasn't all about her.
I tried to understand what was going on but found it difficult.
Simone asked me why I chose her to film.
She asked me what I was getting out of it.
And what she might get out of it.
I kept talking with her and recording our conversations.
Sometimes they lasted for hours.
We talked a lot about what she was going through and the challenges she faced.
How she was being treated.
People were walking away from her.
The mother of her children left and started dating her best friend.
Her daughters missed their dad.
I felt myself getting drawn in to her life.
I took her to the interim show and she said she felt like we were on a date.
That I'd looked after her.
I've been trying to work out what's been happening.
My relationship with Simone has shifted from just being a friend.
I spend more time talking to her about what she's going through than anyone else.
We discuss gender and sexuality and her future.
She confides in me.
Sometimes we are both crying.
Simone intimates her insecurities and fears.
I try to give her another perspective and suggest alternative options.
She idealises people and situations.
I've become consumed by our relationship and what it means.
I've learnt that Simone's life  is a mirror for my life.
That Simone's transformation mirrors my transformation.
When I started the MA programme I hoped I'd be challenged.
I wasn't sure how, but I knew I wanted to change the way I was thinking.
I wanted to re-evaluate my life ands what I was doing.
I wanted to open my mind.
To push myself.
Sharing Simone's experience has prompted me to question everything.
I've reconsidered my politics and motivation.
I've become more empathetic.
I've learnt about myself.
This voyage of discovery would not have happened if I hadn't spent time with Simone.
I guess that's why I chose her.
It was a subconscious decision.
Not rational or considered.
I've immersed myself in Simone's life in order to understand my life.
I can see more clearly.
I have an enhanced sense of clarity and understanding.
I'm not there yet.
But I'm getting there.
It's all work in progress.
Sharing time with Simone has encouraged me to re-evaluate and reconsider.
I've always been a misfit.
I've always sat on the edge looking in.
I've kept people at a distance.
Not wanted to appear sensitive or vulnerable.
Not wanted to be weak.
I've been responsible.
Simone has inspired me.
I feel like I'm being reborn.
Instead of rushing to the finish line I'm enjoying the process.
I've started to understand the impact my parents had on me.
A racist,alcoholic father that physically abused my mother.
A dysfunctional family.
The need to survive.
I missed out on a large chunk of my youth.
I didn't go on holidays.
I went to work instead.
I'm unlearning what I grew up with.
I've lived a lie.
I've been a fraud.
I've realised that I AM NOT ME.

The gallery space is painted solid black.
All walls and the floor.

Two screens are positioned at exactly the same height on juxtaposing walls.
Each screen plays a different film.

One film is nearly 2 hours long.
The other just under 10 minutes.

The long film is a locked-off, uncut shot of James talking with Simone in Simone's lounge.
They are watching several episodes of the award winning TV series "Transparent", which is set in LA.
James and Simone are referencing Goggle Box in this film.
They talk about what they're watching and a lot more.
The film is a moving portrait of their relationship.

The short film was shot at Brands Hatch race track.
James and Simone prepare Simone's car, ready for a race.
Simone is filmed talking with James and driving from the pit to the track.
James' monologue explains the profound impact making the film and spending time with Simone has had on him.
The film is a moving portrait of their relationship.

Text is hand written in white on two black walls.
The featured words are carefully chosen excerpts from 9 conversations with Simone across a 5 month period.

The text aligns with the screens and warrants walking back and forth to read in full.
This repetitive physical movement is designed to immerse and engage the reader.

There are two old wooden seats in the space.
Each faces a screen.
The seats represent age and experience.

Headphones are provided to enhance intimacy. 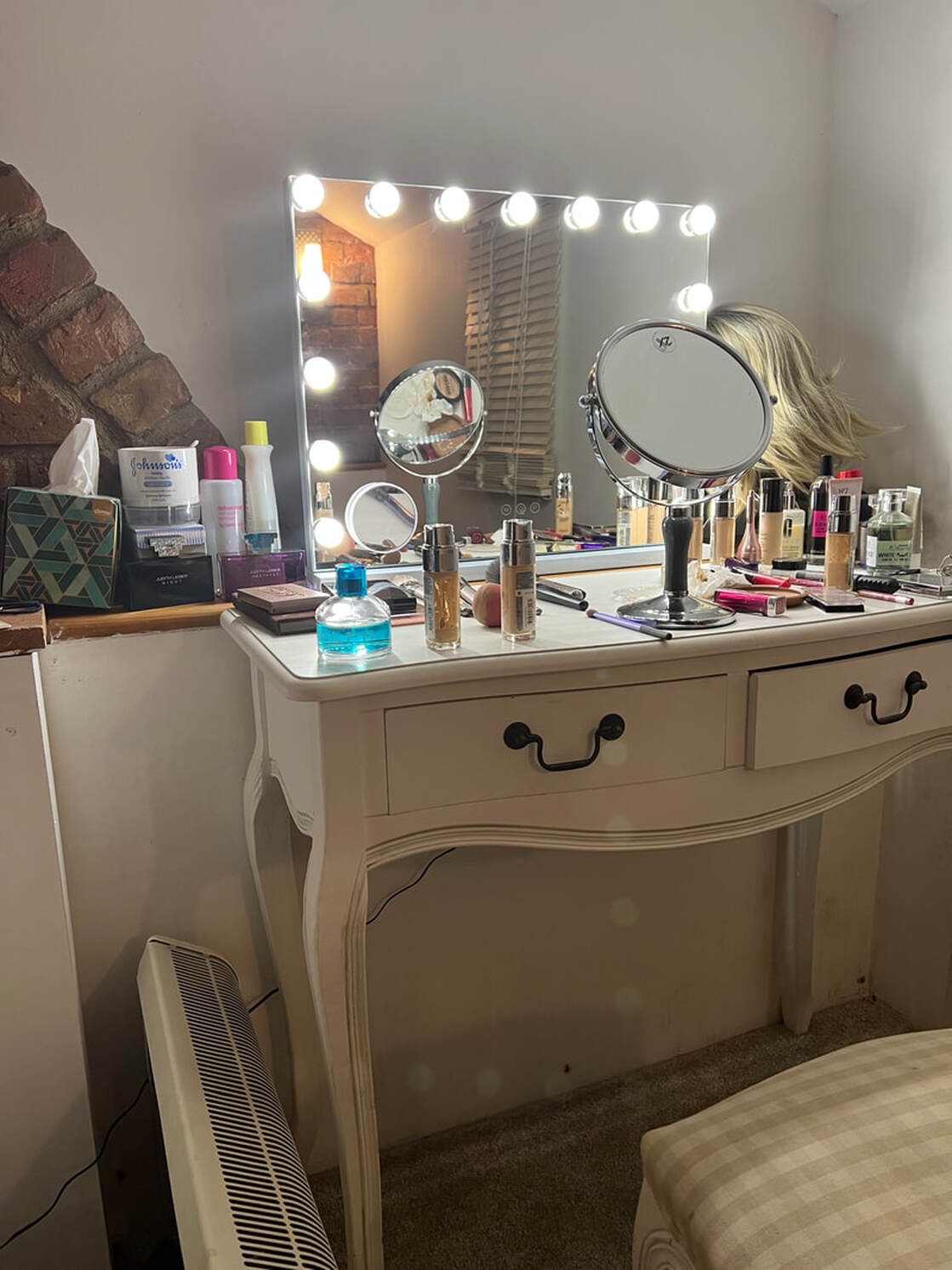 Search for true self is at the core.

Carver's technique is pure and pared back.

Often there are no edits.

And no camera moves.

Focus is on the raw essence of the subject.

Baring the soul in order to reveal the truth.

Transformer immerses the viewer in the process of Simon's transformation into Simone.

The title pays homage to Lou Reed's album "Transformer" and the sentiment of it's content.