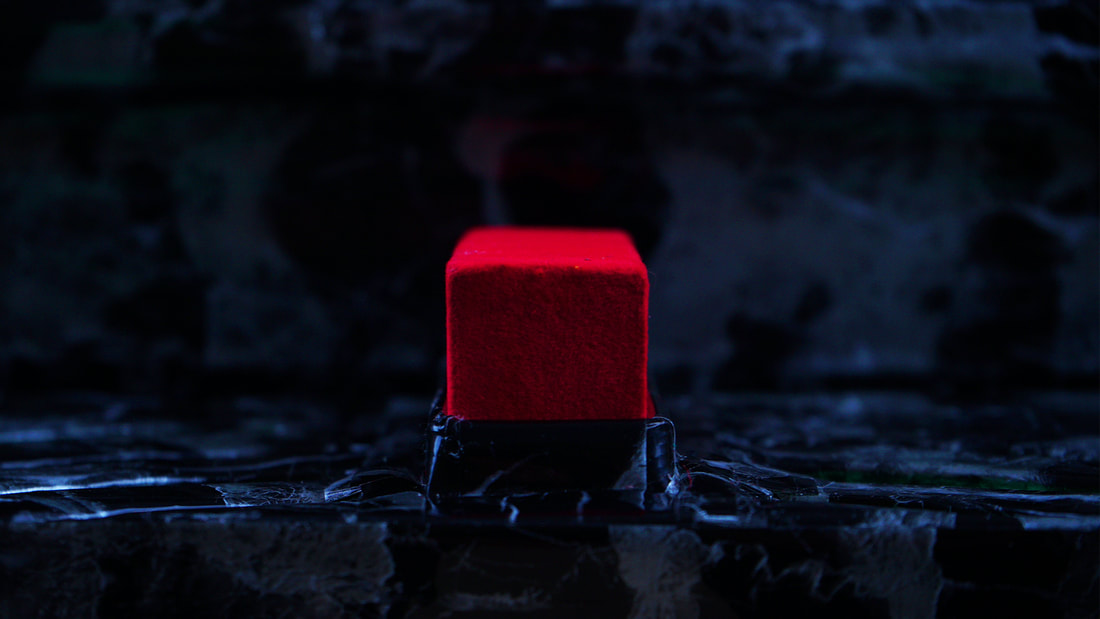 Dingbox (2020) by artist Aoibheann Greenan explores the gesture of the reveal, a tactic increasingly employed by online advertisers to harness attention and extract profit. Greenan draws on the emergent format of unboxing videos, pushing their haptic qualities to elicit their strangely seductive power.

On Dingbox: Andros Zins-Browne in conversation with Aoibheann Greenan

Andros Zins-Browne: Watching Dingbox again, I'm reminded of my friend Martin Silbernagl who was an early internet pioneer.  According to him, in the days before there really was an internet, it was just him and a few other geeks around the world writing code to build communication networks. He says they genuinely believed they would change the world, but couldn't imagine the internet would end up being- in his words- just a bunch of cats and naked people.  Your video isn't pornographic but there is a certain seductiveness and definitely a kind of undressing going on there that feels like a familiar voyeur position, especially when I watch it on a laptop screen.  And there's definitely at least one cat! Where do you see this work in relation to what we used to know as the internet and maybe even what we used to know as 'internet art.'?

Aoibheann Greenan: Dingbox certainly involves a distillation of tropes borne of internet culture- namely unboxing and ASMR videos- and it was made with a single viewer on a laptop/phone screen in mind. But beyond that context I feel like the work taps into a lineage that predates the internet. It’s funny, the more I watched unboxing videos the more I began to sense their affinity with early cinema practitioners like Méliès, who embraced the new technology as a means towards staging more heightened illusions. Unboxing videos share a similar demonstrative mode of address, the viewer is kept partially immersed but always aware of the construction. Companies are now commissioning packaging designers to create ever more elaborate boxes with the express purpose of having popular youtubers unbox their product. So you get this strange collaboration of stagecraft and dramaturgy, albeit in a lo-fi way! I am interested in the performative and affective dimensions of these videos, how they choreograph and modulate our attention. They seem to trigger a collective human drive...what is it about the act of revealing that captivates us so much? In a way, the product becomes irrelevant, it’s all about the unboxing! With Dingbox I attempted to take that idea to its logical extreme!

AZB: I performed in ballets and operas as a kid and I remember this Phillip Glass opera I was in when I was about 10 at the Met, where the whole stage opened up and birthed a brand new stage from its underbelly.  Of course, this was the most amazing moment of the whole performance and I remember thinking at the time, what if the opera was just this continual transition of opera stages... Dingbox brings me back to that moment.  I think somewhere in there was the notion that the stage or staging could potentially become choreography itself.  A stage without performers, or where the stage is the performer and the packaging without a product, or where the packaging is the product.  But Dingbox maybe even goes a step further- it’s not exactly clear who or what the package and the product, or to continue the analogy, the stage and the performer would be- the borders seem to either fuse, disintegrate, or take on each other's properties.

AG: Wow, what an amazing experience! I love the idea of a stage that performs itself, it raises the eerie specter of automation doing away with the performer altogether! When I was making the box I was envisaging it as a kind of malleable proscenium that exists solely to reveal itself. I was interested in the object’s relation to the screen and how I could play with the illusion of surface and depth, each surface opens onto (or bleeds into) a deeper layer in a matryoshka doll effect. Cybernetics was another touchstone, the anonymous hands appear to activate the box but at certain moments it seems as though the box is utilizing the hands, their image becomes temporarily folded into the object. In much the same way the drumming of the hands becomes the rhythm track punctuating the piece. Dingbox, as it stands, is a five minute loop but it could in effect continue indefinitely, spawning many more variations, a kind of autopoietic system.

AZB: Yeah, there's that moment where everything reverses and feels like a kind of Big Crunch, like we're hurtling towards Groundhog's Day and it's all gonna begin again.  But the box also works like a magician's hat- anything can be pulled out. Except unlike a magician, there's something awkward about this box's movements- they're not smooth and seamless like a trick, they're imperfect and a bit clumsy.  The sound and feel of everything is hi-tech, but you're in touch with the knowledge that this is still just a dumb cardboard box.

AG: This goes back to pre-narrative cinema again and that reflexive state of experiencing the spectacle and the mechanism at once. Everything in Dingbox is made by hand and, while I aimed to be as meticulous as I could, there is an unavoidable hokeyness to the whole thing! I chose not to correct any visual imperfections in post but instead offset the image with a clinical soundtrack and polished edit. This, I hope, creates more ambiguity than if I’d opted to go completely lo-fi. I was trying to capture the imaginary of endless production-dissemination-consumption while also alluding to the largely unseen human labor that drives this cycle. The haptic materiality and intimate scale of the box allowed me to toy with suggestions of the body, waste material and inorganic life, puncturing some holes in the seams so to speak!

Andros Zins-Browne is an American choreographer who lives and works in New York and Brussels.

The screening series is led by artist filmmaker and educator Gail Pickering to promote new work emerging from the Artists Film & Moving Image community at Goldsmiths University of London.